geronimo: life on the reservation

Starring veteran performer Rudy Ramos (Yellowstone, Ironsides, The High Chaparral, Dr. Quinn, Medicine Woman: The Movie, The Enforcer, Defiance, Colors), helmed by respected actor/director Steve Railsback (The Visitors – dir. Elia Kazan; Helter Skelter, From Here to Eternity, The X-Files), and written by award-winning novelist Janelle Meraz Hooper (As Brown As I Want: The Indianhead Diaries, Custer and His Naked Ladies).
GERONIMO focuses on the resiliency, humor, and genius of the great Apache leader, bringing his final years to life on the stage in a dramatic recounting of a fascinating, largely forgotten chapter in American history.
This is not the Geronimo you learned about in school. ​"Rudy Ramos shares his reasons for giving life to the Apache leader Geronimo who has been portrayed as a savage in the court of public opinion; that 'savage' image of the man that is often reflected in literature, film, and TV. The more Rudy Ramos looked into the life of the man and the warrior - - Geronimo's humanity took center stage. In this play, we witness his resiliency, humor and genius as he cleverly evolves from a POW into a celebrity and entrepreneur." Click here to read the full interview.
​“The white men will never tell the whole story. They control everything that is said about us in the newspapers and books.  Even the maps favor the whites. They are dotted with each place we fought the white soldiers. Look closely. You will see:  if the soldiers won, it was a battle. If we won, it was a massacre.”

“Veteran actor Rudy Ramos brings a proud, regal intensity to the role of Geronimo, expounding with passion when recounting the injustices to his family and his people.” The Tolucan Times 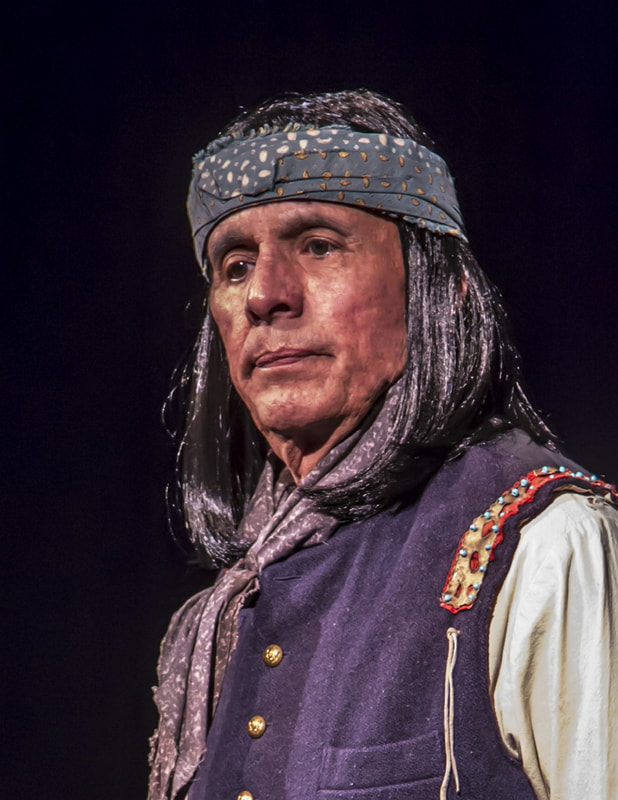 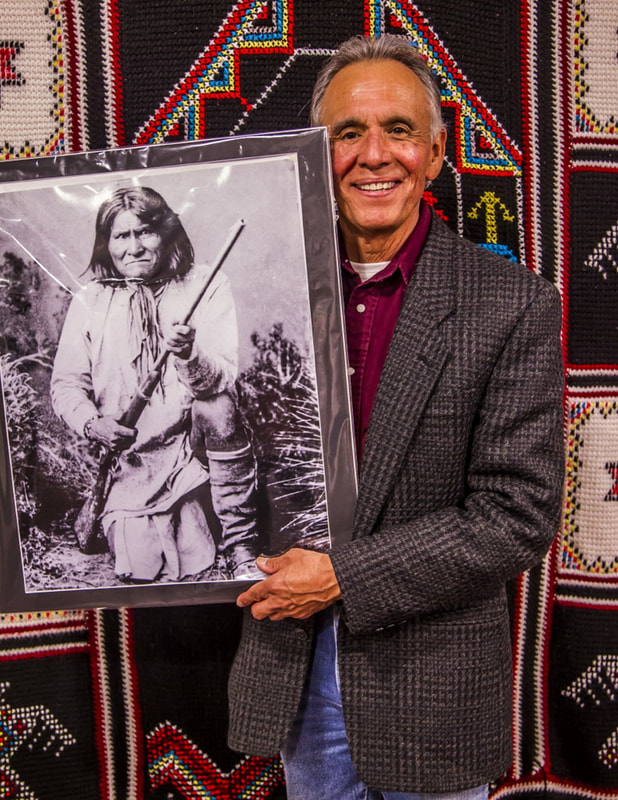 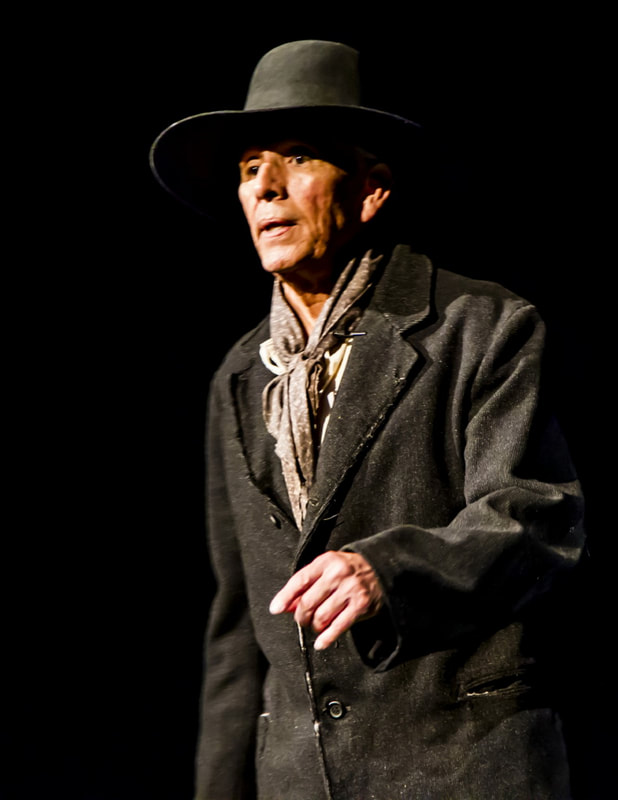 "Ramos, who has acted alongside Clint Eastwood and Ryan O'Neal and been directed by Walter Hill, displays a cerebral and emotional depth and understanding of Hooper's writing that give him the ability to interpret the character he plays vividly, fiercely and with great wisdom, humor and feeling,” says NoHoArtsDistrict.com, succeeding “because of Hooper's far-reaching grasp of Native American life, Railsback's brilliant eye and Ramos' brave, effortless and intuitive effort.”

Says Ramos in an interview with Steve Paterson of broadwayworld.com, “The story is about the last 23 years of Geronimo's life when he was a P.O.W. in his own country. I wanted to tell his side of the story. In the play, you will hear how he felt about being pushed out of his home, the many broken promises by the U.S Army, and the heartbreak he felt when the Mexican Army killed his mother, wife and three children, historical facts not known by many. I wanted to give him the voice he never had, the voice he deserves, the voice that has never been heard. He was a great leader. GERONIMO tells the story of a wrong committed against a whole race of people that America would like to forget - something that is still happening today.”
For further information, please visit the GERONIMO website.

The acting career of Rudy Ramos spans six decades, starting with an appearance on the television show Ironside in 1969.  Six months later he was cast as a series regular in the part of Wind, the volatile half-breed Indian boy in the legendary television western The High Chaparral.  Since then he has made over 60 guest appearance on episodic television including recurring roles on the hit television show Hunter in 1987-1988 and Resurrection Boulevard in 2002-2003.  Mr. Ramos has done numerous movies for television including the ground breaking Helter Skelter (100 million viewers over two nights) playing the part of Danny DeCarlo, Everybody’s Baby: The Rescue of Jessica McClure, and Dr. Quinn, Medicine Woman: The Movie as the villainous Captain Ruiz, and he is currently costarring as Felix Long in Yellowstone.  Feature film credits include The Enforcer with Clint Eastwood, Walter Hill’s classic The Driver with Ryan O’Neal and Academy Award nominee French actress Isabelle Adjani, Defiance with Jan-Michael Vincent and Art Carney, Quicksilver with Kevin Bacon and Laurence Fishburne, Colors with Sean Penn and Robert Duvall and the 2001 sleeper Road Dogz directed by Alfredo Ramos, to name a few. The stage has been a big part of Mr. Ramos’ life with appearances in the Los Angeles area at the Mark Taper Forum, Taper Too, The Met, Matrix Theater, Los Angeles Theatre Center, and Nosotros Theatre.  As a member of the Los Angeles Actors Theatre he performed in the award-winning hit show Short Eyes by Miguel Pinero playing the part of Cupcakes.  The ensemble won the 1977 Los Angeles Drama Critics Award for Best Ensemble.
Steve Railsback (director) made his film debut in The Visitors, directed by Elia Kazan.  He played the parts of two notorious murderers, appearing as Charles Manson in the 1976 television mini-series Helter Skelter and as Ed Gein in the 2000 film Ed Gein, In the Light of the Moon.  In 1979 he played Pvt. Robert E. Lee Prewitt in From Here to Eternity with Natalie Wood.  In 1980 his performance in The Stuntman with Peter O’Toole garnered him a Golden Globe nomination for Best Actor.  He won that honor at the Dallas Film Festival.  His work includes memorable roles in Tobe Hooper’s Lifeforce as Col. Tom Carlsen and as Duane Barry in two of the most popular episodes of The X-Files, the two-part Duane Barry and Ascension.  With over 79 titles in his filmography, Steve has served as inspiration to actors and directors alike.
Janelle Meraz Hooper (playwright) is an award-winning novelist whose books include A Three-Turtle Summer, As Brown As I Want: The Indianhead Diaries, Custer and His Naked Ladies, Bears in the Hibiscus, Boogie, Boots & Cherry Pie, and Free Pecan Pie and other Chick Stories. GERONIMO Life on the Reservation is her debut as a playwright. www.janellemerazhooper.com
DUE TO CONCERNS OVER CORONAVIRUS, PERFORMANCES OF GERONIMO WILL BE POSTPONED. READ for more info.
Thank you for your patience and consideration during this time.
Final Los Angeles Performances!
Saturday, April 18 at 7pm • Sunday, April 19 at 2:30pm
​Tickets: $20; $15 for students, teachers, seniors, members of the military and groups of 8 or more
Santa Monica Playhouse Reserves the Right to Cancel or Reschedule Performances Without Prior Notice.